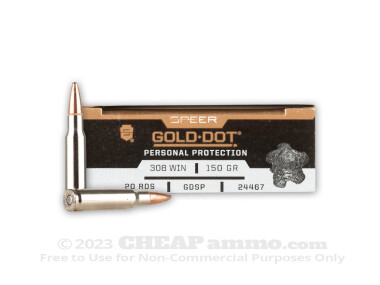 This 308 Win cartridge by Speer is engineered to meet the demands of discerning law enforcement professionals, but it is available to the general public as well. If you would defend yourself with an M1A SOCOM 16, AR-10, or other short barrel rifle, then you’ll benefit from terminal performance that the FBI test protocol identifies as ideal for personal protection.

This round’s 150 grain Gold Dot bullet is a traditional soft point, with a jacket which partially exposes the lead in its core to amplify stopping power via rapid expansion. The jacket itself is electrochemically bonded to the core, making the two essentially inseparable throughout high velocity penetration of barriers and soft tissue alike. Its unusually concentric jacket additionally enhances this bullet’s in-flight stability, providing you with the accuracy you need to end a dangerous altercation fast and decisively.

Speer’s expertly drawn and tapered brass case has the uniform dimensions it needs to run flawlessly through a semi-automatic weapon. Its sleek nickel plating makes it cycle with even greater efficiency, as well as combats gradual corrosion from humidity while in storage. The Idaho-based manufacturer also loads consistent primers and propellant to even further standardize this dependable round’s performance.