For shooters and especially reloaders, the differences between Boxer and Berdan primers is not of inconsequential importance. For those of us who merrily blast away and do not “recycle” the importance may extend just so far as to which cases to save for our reloading friends or associates.

Anyone who looks into their spent casing has found that determining which primer system any case employs is a simple enough task: one center hole means boxer, two holes means Berdan.

In the United States, “boxer primed” is almost synonymous with “reloadable” leading to an assumption that Berdan is not reloadable.  This is misleading: any case can be reloaded, it is simply a matter of the tools, steps and incentive involved.  This is due to the more subtle differences of the two.

What Are Boxer Primers?

Around 1866 Colonel Edward Boxer of the Royal Arsenal in the UK developed a self-contained cartridge using the ignition system that now bears his name.  All primed cases have the same parts: the case itself, a chemical spark reacting primer and an anvil: what the firing pin crushes the primer against to get the ignition spark into the case where the powder is stored. Col. Boxer developed a primer that has the anvil contained within itself.  This allows for a single hole in the base to send the spark into the case.  This also allows for the spent primer to be removed with a simple punch via the open neck and a new primer to be loaded with relative ease (with the proper tools of course).

What Are Berdan Primers?

At pretty much the same time, General Hiram Berdan of NY, patented a primer system in his own name. Berdan designed the anvil to be in the case rather than within the primer.  As the anvil is in the center of the “centerfire” case, it has two evenly spaced charging ports (the two holes seen at the bottom of the inside of the case).

In this design, spent primers can be removed but instead of using a punch most use a hydraulic system where the case is filled with water and a rod the same diameter of the bullet is forced into the neck.  This pushes the water through the two charging ports with enough pressure to dislodge the dead primer.  From there, reseating a new Berdan primer is similar to resetting a Boxer.

Because the anvil is within a Berdan case, the case is a bit more difficult to manufacture, though the primers are correspondingly simple.  This probably explains why so many military surplus cartridges use the Berdan system: once the case molds are set up, using a simple (typically assumed as more “reliable”) primer makes sense for the millions of cartridges produced for government service.

When it comes to reloading, it very well may be simpler to scrap the cases and build again (after all the machinery is already there), and this removes any concern over the anvil, or the case walls themselves, being worn out by repeated use. As stated Berdan primers are usually seen from government arsenal production ammunition manufacturers (Tula, Wolf, Norinco, etc).

Meanwhile commercial ammunition - as well as military ammunition in the U.S. and other “western” nations - is increasingly made with Boxer primers.  This is mostly as an incentive to recycle the cases.  Not necessarily for environmental concerns (heavens no) but for commercial incentives from the reloading consumer – be they individuals or established ranges – or to get cases to be collected and returned to the manufacturer for additional production where tumblers and resizing are still cheaper than recasting the cases.  A more intricate primer design means less work recycling the largest component: the case.  Despite being more intricate, the primer really loses nothing in the way of reliability either. 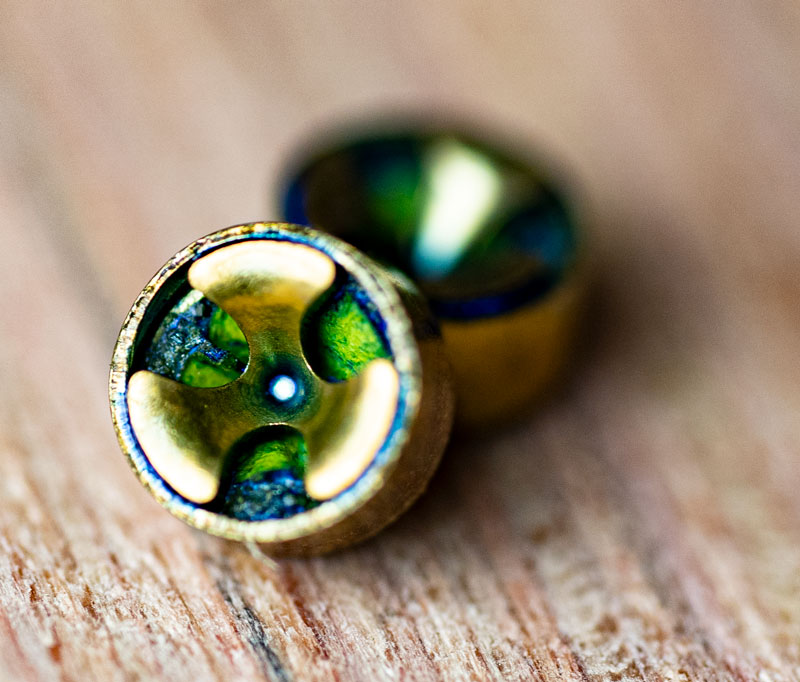 For large manufacturers with mass production machinery available, the differences are negligible in production and performance.  For private reloaders, the main benefit of Boxer over Berdan, besides fewer steps in removing spent primers from the former, is in standardization.  While Boxer primers are more complicated, they also only come in four standardized sizes (somewhat surprising given that it was designed by an Englishman).


Can You Reload Berdan Primed Casings?

As Berdan primers are often used by government arsenals, the arsenals often used primers of their own making which may or may not be the same size of another arsenal within the same country, let alone manufacturers from another country.  There is no standardization, just a lot of very, very close because the primer pocket in the case of common caliber ammunition is more varied.

True, Boxer primed ammunition come in different primer sizes too, as determined by any individual manufacturer, but there are only four diameters to choose from: small pistol and small rifle (.175”), shotgun and muzzle loaders (.209”), large rifle (.210”) and the less ubiquitous .50 BMG (.315”).  Berdan varies minutely making replacement primer fitting a nightmare of supply and installation outside of whichever manufacturing facility that produced it.

That does not mean it cannot be done, however.  Further, some enterprising enthusiasts (a polite phrase for anyone eccentric enough to explore the following option) go so far as to convert their spent Berdan cases to being Boxer capable.  This is done by carefully drilling out the anvil to create a single ignition port in the base of the case and, where necessary, machining a bushing (often of soft metal like copper or brass tubing) to completely seat a new Boxer primer into the case.  The process is usually taken on as a hobby, as there is little economic efficiency. Besides making extended use of mil surp casings it at least keeps such individuals off the streets where their esoteric knowledge may attract ridicule from those less interested.  Otherwise most reloaders tend to stick to the Boxer system, as progressive presses remove much of the perceived [by some] tedium of handloading.

From a performance perspective, there is very little to promote one type over the other: both are vulnerable to the same natural elements and misuses that can lead to misfires. Boxer is considered reloadable only for its simplicity of design.  However, the common perception that Berdan is “unreloadable” is not true.  It simply requires a greater commitment from, and therefore becomes a secondary choice to, those looking for more bang for their effort.