CheapAmmo.com is your source for bulk ammo for sale, discount rounds and, of course, cheap ammo!

We carry a massive line-up of handgun ammo, rifle ammo, shotgun ammo and rimfire loads. Our team is made up of shooters and we only carry ammunition brands we trust enough to shoot ourselves, and shoot with our families. Our American-team of shooter support specialists are not only English-first speakers, they're also gun owners who've learned a ton about the products we carry.

Load up today and rest assured if you see the ammo on our website, we have it in-stock and you'll get supersonic fast shipping. So, pick out some rounds today and know you're getting reliable ammo at the kind of price you'd expect from a place called "CheapAmmo.com".

Whether you stick to tried and true American made ammo from legendary names like Winchester and Federal or you're looking to save a few bucks and want to shoot imported loads from Tula or Magtech --- we have you covered! Check out all our in-stock ammo by clicking the manufacturer links below.

Our hot deals change week to week, so stop back and see what Cheapammo has featured for ammunition. 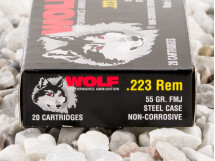