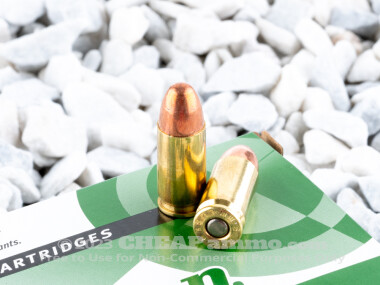 Remington's 9mm ammo loaded with a 124 grain full metal jacket bullet has a muzzle velocity of 1,100 feet per second and delivers just under 340 foot pounds of energy. Remington designed this ammunition specifically for target shooting and training applications. This round should not be confused with the 9mm NATO round, which is essentially a 9mm +p round. The additional bullet weight offers an option to shooters who experience cycling difficulties with the more common 155 grain projectile.

The 9mm Parabellum was created literally "for war", as it was first adopted by the armed forces of Imperial Germany over 110 years ago. Since then it is more commonly known by the name of its designer, Luger, and has become the caliber of choice of almost every modern military and law enforcement agency, even returning to service in the FBI almost 30 years after it was replaced. This is a testament to the adaptability of the round.

For over two hundred years Remington is a name recognized as an American producer of quality firearms and ammunition. The green and white labeling is easily recognized and trusted by civilian and LEO shooters for consistent reliability. Remington produces these rounds with brass cases and boxer primers for additional shooting value.