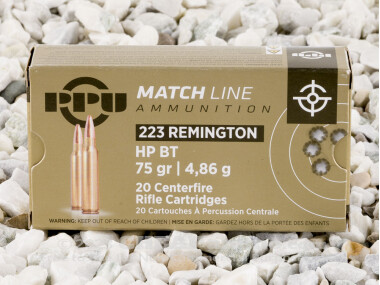 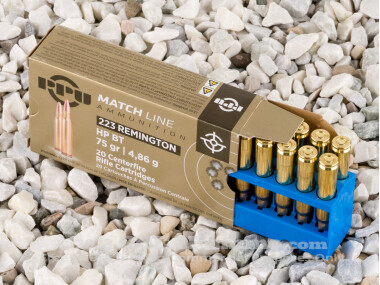 Despite military efforts to replace it and popular assumptions against the caliber’s demure size, the .223 Remington is closing in on seven decades of continued use and reliance by sportsmen and militaries alike. Developed to maximize terminal ballistic performance through hyper-velocity in a compact package to allow soldiers to could carry more rounds, the .223 became the basis for the 5.56 NATO round, and in fact can be fired in 5.56 chambers, though the opposite is not recommended. The caliber’s popularity is based on this versatility and no doubt married to the popularity of the AR15 series of rifles.

The 75 grain hollow point bullet by PRVI exits the muzzle at 2723 feet per second with 1234 foot pounds of energy behind it. The heavier, boat tail bullet is better suited for lower twist barrels and ideal for varmint hunting and competition match shooting.

PRVI earned the addition of Partizan to its name after providing ammunition to the partisan resistance fighters against the German occupation of Yugoslavia during World War II. The company was established with that country in the 1920’s and has provided military ammunition for both Yugoslavia and later Serbia after the break up of the Balkans in the 1990’s. Manufactured to exacting military standards, PRVI also comes with boxer primed cases for reloading to add additional value.