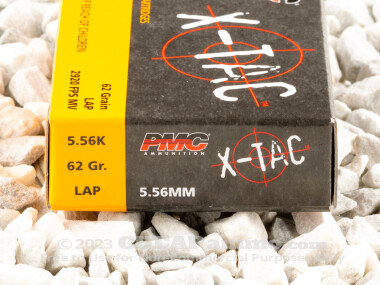 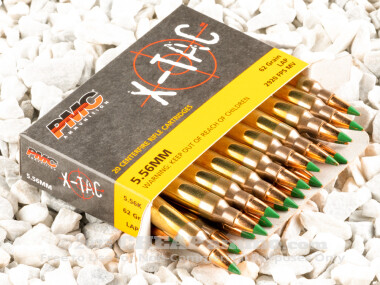 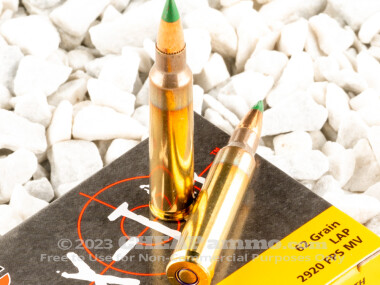 This PMC 5.56x45 ammo is loaded with a 62 grain bullet that is designed to be more stable over long distances than the more common 55 grain. This allows you to fire the rounds out of lower twist barrels (1:8 for eg) and maintain your accuracy. This full metal jacketed round has a muzzle velocity of 2,920 feet per second and over 1,150 foot pounds of energy. The green tip "penetrator" is often confused as an Armor Piercing round, but simply refers to the 7 grain steel core in the NATO rounds. This is a bulk 1,000 round lot is ideal for range training, target shooting and competitions. Inside a case from the PMC factory, you'll find 50 individual boxes with each containing 20 rounds of 5.56 ammo that's ready for your rifle.

Developed in the late 1950's to be a lightweight alternative to the 7.62x51 NATO round, the 5.56 was developed from the .222 Remington just like the similar in appearance .223 Remington. Care should be taken to never load the 5.56 in a .223 firearm: although it will fire, there is greater pressure in the 5.56 than .223 firearms are designed for.

Precision Made Cartridges manufactures not only ammunition for commercial export, but also for the South Korean military: a country whose military preparation can not be under estimated these days. By exercising strict controls over even the selection of raw component materials, PMC guarantees premium production that American shooters have come to embrace and appreciate. Brass cases are fully reloadable adding further value to this 1,000 round lot that shooters and reloaders alike will prize.