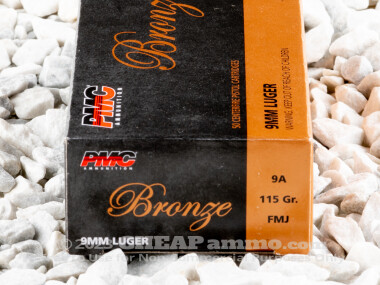 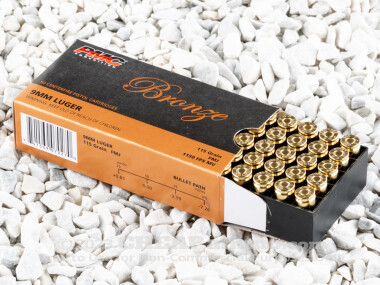 9mm Luger is the most widely used semi-automatic round in the world. Ever since its creation in 1902, the 9mm Luger/Parabellum has been embraced by most of the world's armed forces as well as US law enforcement and private shooters for competitive, recreational and defensive purposes. And now it has retaken its place as the official service round of the FBI 30-years after being replaced by the 40 S&W. The 9mm is back with a vengeance, serving into a second century and with more shooters than ever before. PMC's 115 grain 9mm bullet leaves the muzzle at 1,150 feet per second with about 335 foot pounds of energy. It is ideal for target, competitive and even introduction shooting.

Precision Made Cartridge, or PMC, is a manufacturer of ammunition for the South Korean military. If ever there was a military that needed to have full trust in its munitions, South Korea must be near the head of the list. To prove the point, PMC is one of the few ammunition makers that maintain full control over their components from raw materials to finished product: it is the only way to be sure of quality and reliability. A surety that is extended to you when you purchase PMC.