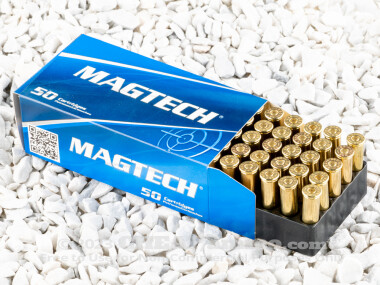 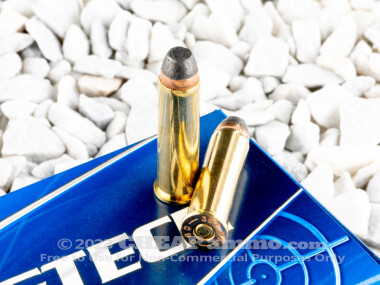 The .357 Magnum was introduced in 1934, born of a demand for a more effective round in dealing with the era’s bullet proof vests worn by high profile bank robbers. Individuals such as John Dillinger, who favored the Colt .38 Super. S&W’s contribution was to lengthen their .38 Special case for higher pressure loads for use in a revolver: which of course was what most lawmen were trained to use. The result was a very potent round that serves both lawman and hunter alike: in carbines or even revolcers the caliber is effective at close range for deer as well as coyotes. The semi jacketed soft point 158 grain bullet by Magtech has a muzzle velocity of 1235 feet per second with 535 foot pounds of energy. It is suitable for target and personal defense, especially where hollow point rounds may be restricted.

Well known for their target and range ammo, Magtech’s contribution to the shooting world began in 1990 with economically priced products. Since then their expansion into more purpose specific ammo has only expanded, but they have not lost their sense of quality or economy. These nickel plated cases are boxer primed for shooters looking to handload their own cartridges for this very versatile cartridge.