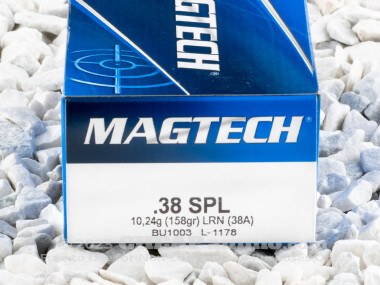 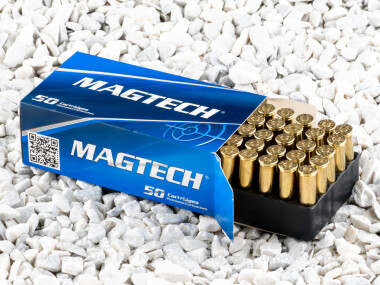 When it comes to cheap 38 special ammo, it's tough to find a better value than Magtech. Their 158 grain Lead Round Nose (LRN) bullet brings a velocity of 750+ feet per second with 200 foot pounds of energy. It is ideal for target shooting not only in revolvers but also carbines chambered in .38 special and .357 magnum. With factory fresh brass cases and reliable feeding and extraction, Magtech offers some of the most bang for the buck out there to American civilian pistol shooters.

This product for sale is a single box of factory new ammunition. Inside that box, you'll find 50 rounds that are ready for your pistol or revolver.

When the US military replaced the venerable .45 Long Colt revolver in the later 1890's it did so with Colt's .38, which unfortunately proved itself to be insufficient to the duty thrust upon it when American forces came into conflict with Moros rebels in the Philippines at the turn of the century. Smith & Wesson's solution was their .38 SPECIAL (as opposed to their older, squatter .38 S&W). While not as potent as the .45 ACP that became the preferred military replacement, the Special did become acceptable for rear echelon troops and of course civilian shooters and law enforcement.

Magtech has been commercially available as a CBC Group distributor since 1990. Since that time, it has been an increasingly popular choice with target and training shooters throughout the United States. Brass cases with boxer primers also make Magtech a popular choice with reloaders who make their own self defense rounds off of the empties.