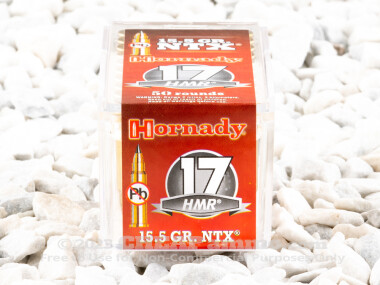 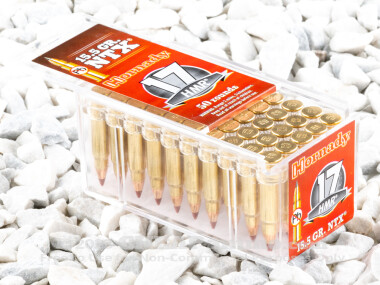 The .17 Hornady Magnum Rimfire (HMR) has become the most successful of the rimfire “wildcat” rounds that sought to replicate the performance of the discontinued 5mm RRM. This particular caliber is the result of necking down a .22 WMR case to the .17 diameter bullet. While lighter than the objective Remington round, it is faster and flatter shooting. The result is a caliber that rivals the velocities of larger, centerfire varmint rounds, but in a cheaper, lighter cartridge. The 15.5 grain, polymer tipped bullet by Hornady leaves the muzzle at 2525 feet per second with 236 foot pounds of energy. While perfectly suitable for target shooting, informal and official, this is a varmint hunting round through and through, designed to deliver its energy accurately to and then into the target, delivering performances that are just shy of centerfire cartridges at a fraction of the cost.

Hornady ammunition not only introduced the .17 HMR cartridge but also pioneered the poly tipped/FTX bullet. Begun in the 1940’s making bullet jackets out of spent long rifle brass, the company was well versed in what made bullets deliver dependable and consistent performance. Today it is among the benchmark of cartridge providers to measure the bar of firearm performance.