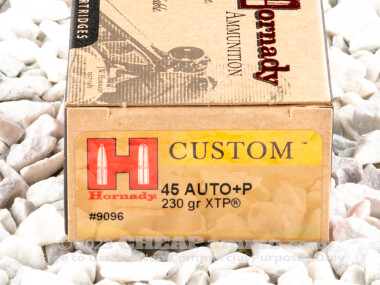 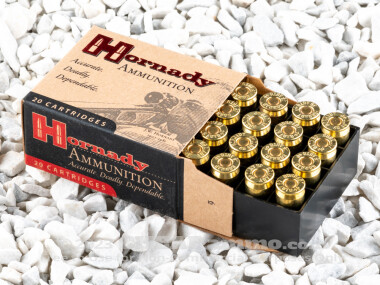 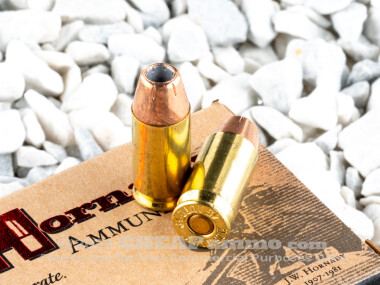 45 ACP hollow point ammo from a name you can trust: Hornady.

Hornady's 230 grain jacketed hollow point (JHP) extreme terminal performance (XTP) bullet exits the muzzle at 950 feet per second with 460 foot pounds of energy. It is everything the legend of the .45 ACP promises. Or at least the closest thing to being a surefire manstopper, assuming you hit the mark, of course.

When ordering this product, you'll get a full 200 round case of Hornady's 45 ACP self-defense ammo. Inside, you'll find 10 individual boxes with each containing 20 rounds of ammo that's ready to fire.

Ever since its introduction in 1908 and government adoption in 1911, the .45 Automatic Colt Pistol cartridge has captured the imaginations of everyone who ever fired it. Adopted as the only acceptable replacement to the US Army's .45 Long Colt, the .45 ACP has long had a reputation as being a "man stopper." As with all calibers, shot placement has more to do with effect than anything else, but this round soldiered on for over 70 years officially, and to date unofficially, as a trusted caliber that was both effective and comfortable to shoot.

Hornady's reputation as a premium ammunition manufacturer began in modest yet appropriate circumstances: producing bullet jackets from spent rimfire cases in the 1940's. By the 1960's Hornady production of defense and hunting cartridges became well established and is considered ironclad to this day. Quality brass cases are fully reloadable, making this 200 round lot the perfect diet to feed your .45 caliber firearms.