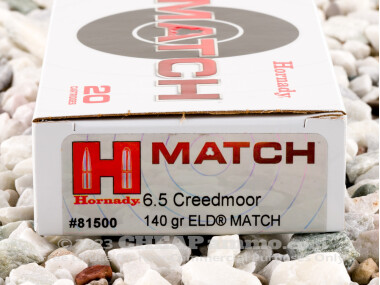 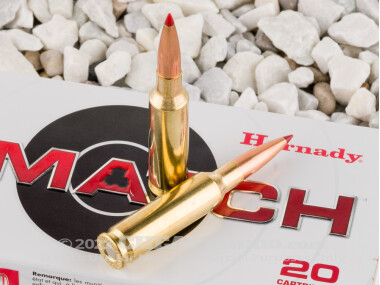 You wouldn’t think that a bullet could contain as many performance enhancing features as a Swiss watch -- until you inspected Hornady’s ELD Match, that is. This 6.5 Creedmoor cartridge’s 140 grain bullet begins with the proprietary Heat Shield, a polymer tip that is specially formulated to resist aerodynamic heating. Thanks to it, the bullet’s meplat remains perfectly pointed and centered in the face of its blistering fast 2,710 fps muzzle velocity.

It certainly doesn’t end there, of course. The ELD Match’s ballistic coefficient is amplified to an impressive 0.646 via its sleek secant ogive geometry, as well as its drag-reducing boat tail base. The ELD Match’s evenly distributed lead core and concentric AMP jacket further provide the rotational stability that a bullet needs to stay on course hundreds of yards down the range.

Hornady made certain that every round in this box possesses effectively the same brass casing, and gave each the same charge of clean burning propellant. The Nebraskan virtuoso’s Boxer primer ignites instantaneously in reaction to the touch of a firing pin, tying everything together to provide one of the best match loads you’ll have ever fired.