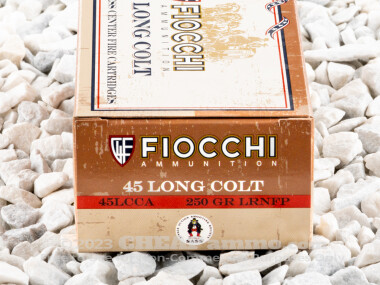 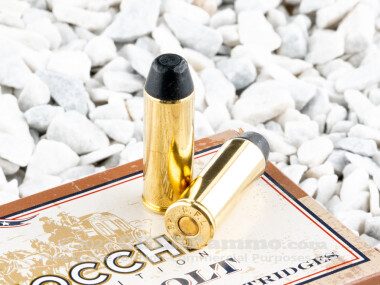 The Italians probably witnessed more SAA revolvers in action than other Europeans. We’re only guessing that because so many Spaghetti Westerns were filmed over there. We’re also not suggesting that the Fiocchi family were hiding in the bushes to spy on the filming of Day of Anger, but they clearly knew what they were doing when they made this 45 Long Colt round.

This cartridge features a 250 grain lead round nose flat point projectile. It has no jacket, which keeps it true to the 45 Long Colt’s original design. It hits hard, with 312 ft lbs muzzle energy and broad tip that transfers a lot of force simultaneously. This round is especially well suited for paper targets, because a flat point works more like a hole punch than a round nose ever could.

Fiocchi’s been making primers and casings longer than a dog’s age. Several dogs’ ages, in fact, and it shows in their consistency and reliability. This round’s modern propellant burns clean for a 750 fps muzzle velocity.