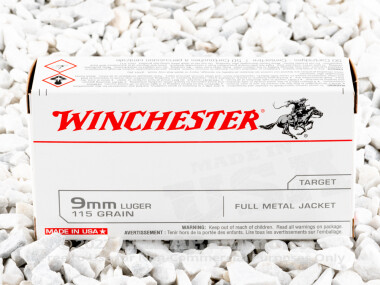 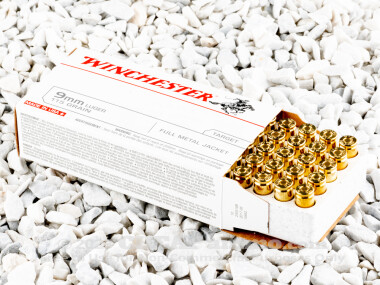 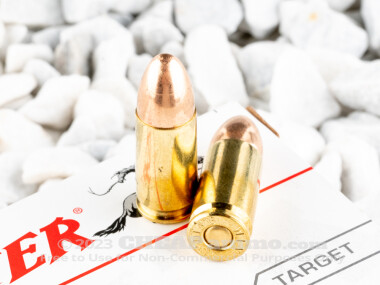 9mm Luger has become and remains one of the most popular handgun cartridges in the world for both civilian competition and defense and military use. The straight walled cartridge was presented in 1902 as a larger caliber alternative to the famous Luger pistol and has gone on to be adopted by almost every nation in the world. Often slated for replacement, its simplistic effectiveness and reliability continues to keep it as an officially adopted cartridge of governments and primary choice of individuals over a century later. Shooters find the easy recoil, reliable function and versatility thru different bullet designs to be among its primary virtues, and the cartridge is also comparatively easy to reload. Winchester’s 115 grain full metal jacket bullet has a muzzle velocity of 1190 feet per second with 362 foot pounds of energy. This is a training, target and competition round designed with consistent performance in mind.

Winchester‘s “white box” ammo is recognized as a standard of premium performance at the range, especially for the quality and reloadability of the boxer primed, brass cases. Manufactured at the Olin plant in Clayton Missouri, the Winchester banner is among the most respected names in ammo production in the world with billions or rounds manufactured to support that perception.

Exactly what I purchased, ahead of schedule