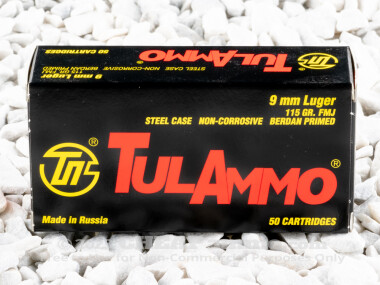 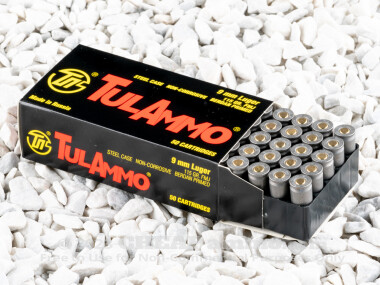 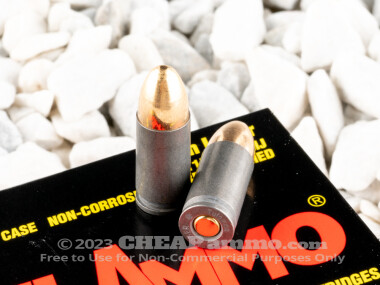 Tula's 115 grain full metal jacket 9mm ammo is a perfect choice for the economical shooter who is looking for a lot of ammo for the money. These rounds drive a bullet with a nominal muzzle velocity of 1150 feet per second and around 360 foot lbs of energy.

With this product, you'll get a single box of Tula 9mm ammo that has 50 rounds inside that are ready for your pistol or carbine. We also sell this ammo in bulk – get the 1,000 round case of this same Tula ammo for sale here

The 9mm Luger is also known as the Parabellum, Latin meaning "for war." From its introduction in 1902, the 9mm has been used precisely for war, first by the German military in World War I, then by many nations on both sides in World War II. Today it is not only the sidearm and submachine gun round of the North Atlantic Treaty Organization (NATO), but also the same for a great many nations under arms throughout the world.

Tula Cartridge Works of Moscow provides ammunition for both the Russian military as well as for export to foreign military and commercial markets. To that end, Tula merges product reliability with considerably high level of output. The steel cased berdan primed cases are not reloadable, but shooters find the value in reliable ignition and economy of purchase price. True to Russian standards, it is designed to work under any circumstances, and the market demand nd quantity of production suggests Tula meets consumers' needs.