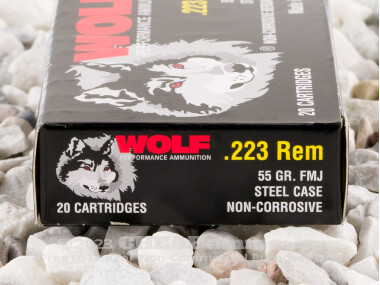 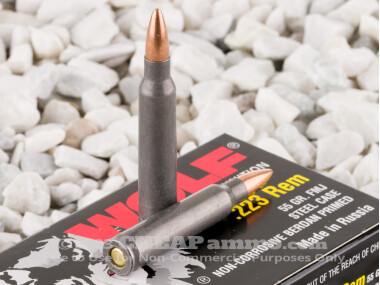 Fans of the AR-15 must engage in an endless search for affordably priced ammo. We’re happy to say you’re doing a great job. You’ve not only found CheapAmmo.com, with a name that says it all. You’ve also found this case of 223 Rem by Wolf. Outside of stealing ammo, Wolf is just about the cheapest way to get a whole lot of mileage out of your favorite rifle.

Here’s the problem with brass: It’s made out of two thirds copper, a metal that is not only relatively rare but also very useful for a load of other applications. Here’s the awesome thing about Wolf: Their cases are made out of steel instead of brass, which brings their cost per round way, way down. Wolf also puts steel in these rounds’ 55 grain FMJ bullets to make them even more affordable, although the bullets are still copper coated to reduce barrel fouling.

Saving so much money comes with a few compromises. Steel cases are nearly impossible to reload, and also allow more carbon fouling into a rifle’s action. Magnetic bullets are also banned at some ranges, partly because they have a higher chance of sparking and ricocheting. But if you can overlook these setbacks, you’ll probably become another one of Wolf’s countless fans.

These rounds are equipped with Berdan primers. They may have slightly different internal workings, but at the end of the day it is impossible to notice a difference in their performance. Wolf’s Berdan primers are completely non-corrosive, so you don’t have to worry about rust forming within your rifle after running a few hundred rounds through it.

I am okay very quickly after being ordered.

I enjoy having ammo that you can rely on,and Wolf FMJ 55 grain .223 Rem ammo is a very good and reliable ammo. Thank you CHEAPAMMO,COM