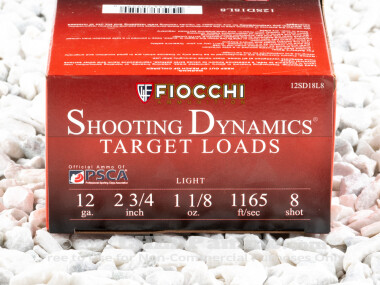 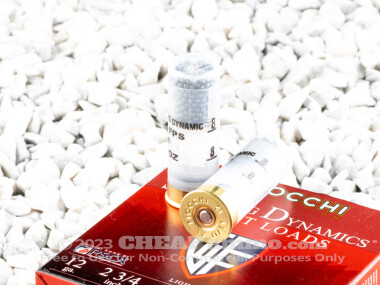 While 12 gauge ammunition is well known for personal and home defense, it is well established as a gaming firearm among Europe’s elite for the last two centuries. It remains a popular Olympic sport. And is still used as a non-Olympian sporting activity, both in the field, but more commonly in today’s modern world, at the local skeet range or shotgun club where the sport of clay shooting has experienced a notable resurgence in recent years. To that end, ammunition dedicated to the idea of disintegrating clays instead of humanely bringing down game has sponsored a new line of target type ammunition. This example, Fiocchi’s 2.75” Shooting Dynamics target loads, are loaded with 1 1/8 ounces of #8 shot (approximately 460 lead pellets that are about .09” in diameter) at about 1165 feet per second from the muzzle. It is an ideal round designed for maximum shot density without knocking the shooter back: after all, few people find an abusive sport that much fun.

Fiocchi ammunition has been at the forefront of providing sporting ammunition to Europe’s elites since 1876. Today, US manufactured shells come from their Missouri plant and as always are presented in reloadable primers for reloading in appropriate presses.

Pick up this case of bulk 12 gauge ammp today and you’ll get 250 rounds delivered direct to your door or FFL of your choice.